skip to main | skip to sidebar

Maybe we'll finish this in 2011 after all

Although I've been lax in my blogging duties, work has continued on the home addition during these silent weeks (ahem, months). When I last gave an update, the house finally had sheathing and a roof. Exciting times.

The next step was to add some windows and wrap the house in Tyvek. In the spring we'll put new windows in the existing side of the house, too. 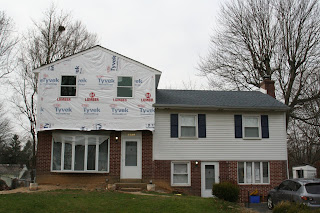 Then we started getting something that looked suspiciously like siding. Yes, we chose to stick with white. The detached garage has white siding that is only about 7yrs old, and we really didn't want to make more work for ourselves by choosing a different color for the house, forcing us to reside the garage to make them match. 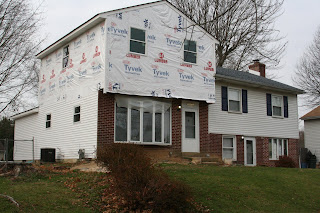 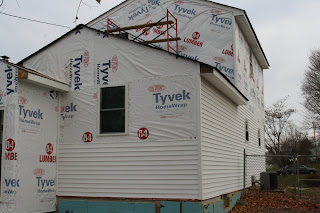 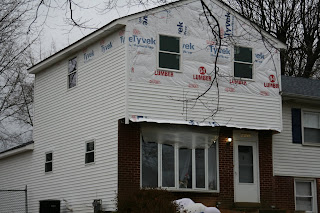 We'd been hoping to put off the rest of the siding until spring, but when the township inspector came to do the framing inspection he said that Tyvek can only be exposed to the elements for 120 days before it loses key properties that keep out moisture, and after 120 days we'd have to take it down and start over. So Ken has been out in the cold putting up siding, sometimes alone and sometimes with friends. My long-suffering, devoted husband. Due to his hard work, the siding might actually be done this weekend, which has been pretty forgiving temperature-wise.

Inside we've been working on putting up the insulation since our heating bill has been so high it's forced the power company to change the graph on our monthly bill so they can squeeze in higher numbers. This is where I have come in since stapling up insulation does not require any skill whatsover. 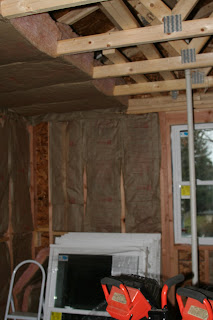 The wall insulation is nearly complete in both the kitchen and the new master bedroom. I've learned that the pink stuff is no fun at all to cut through, and it's not fun at all getting itchy from it, but it sure makes the house warmer and less drafty. Ken's done some of the ceiling insulation, but since he needs to leave space open to run wiring and do the lighting, he can't finish it quite yet. We're hoping within the coming weeks to finish both the wiring and insulation, get both items inspected (there are a bazillion inspections involved in all this mess), and then be able to start putting up drywall. I think that's the point at which the interior will start looking like a real house.

Meanwhile, we had our favorite guy at 84 Lumber come to the house with the guy who builds staircases for them, they took measurements, and a week later they delivered three sets of steps: one for the basement, one for the new master bedroom, and a teeny one-step set that will go from the kitchen to the mudroom. With any luck those stairs, which are extremely heavy, will be installed in the next couple weekends, and we'll have easier access to the basement and new bedroom. Crawling up into the bedroom through the old attic access panel has got to be losing its luster for Ken and everyone who comes over to help. I haven't had to do it too often, but it's not easy on the joints.

So that's where we stand at the fresh start of 2011. Ken predicts that the major work will all be finished by July. I say, Why rush? If we don't finish until early 2012, we save an entire year's worth of the enormous amount of taxes we're going to get charged when they reassess this place after passing the final inspection. Yowch.
Posted by paddy+henrysmom at 10:08 PM

Lesson of the day

When you order too many cabinets to be delivered at one time, suggest to the delivery people that they either bring all the base cabinets or all the uppers. Cuz a mix of the two doesn't do anyone any good.