skip to main | skip to sidebar

What else happened while I was gone, and where are we now?

I'm still roughly a week behind so I'll bring you up to speed as quickly as possible.

Last Wed about 40 roof and floor trusses arrived, and Ken and his dad spent most of the rest of the day carrying them from the front yard to the backyard, where they're currently living under another big blue tarp until their day in the sun. We're hoping that day comes this weekend, but it depends on the mason pouring the slab to the new basement room.

During the week the block work progressed: 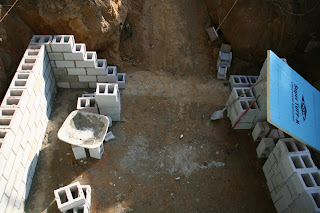 And Ken rigged up a way to try to keep us from air conditioning the entire neighborhood while our back wall is missing: 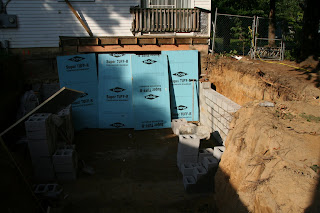 The blue sheets are insulation board, which is better than nothing. Still, PECO is making out like a bandit this month.

The mason actually turned up last Saturday to get the block work moving along since he wants to be outta here by the end of this week (something on which he and I completely agree). The same day Ken leveled the sonotubes out front that will be filled with concrete soon and will act as the piers for the new porch.

Sunday the kids and I rolled home from my parents' house and got to witness the week's worth of madness for ourselves. It's a little dusty in here, but my parents lent us an air purifier with a hepa filter, and I turn that on whenever I can to try to relieve some of our allergies that are being wickedly stirred up by all the commotion around here.

Monday through today the mason and crew continued their work, and now the block walls are within a few measly blocks of being done: 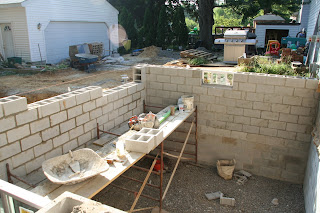 In the above photo you can see (somewhat) the two little windows (one near to you and one on the far side) that we had them set into the wall so there's a little light in the new storage room and some air as well should we want some. They put the far window in the wrong place--it should've been in the center of the rear wall, not that side wall--but Ken is already mentally noodling around with how to adjust for that booboo.

Now it's time for a few complaints:
(1) On Monday we returned home late in the evening to find the large two-part gate on the west side of our house hanging wide open. We usually close it because of the dogs, but no big deal since it's not as if the dogs are outside when we're not home. Problem was when Ken went to close the gate and found that the left-hand half had been torn from the fence and was mangled beyond repair. Our guess is that the mason's work truck snagged it on the way out and ripped it off the hinges, but they might have also run over it to cause the damage we saw. Regardless, we now have a yard with a wide open side to it and two dogs who like to chase rabbits and squirrels. Which means standing at the gate every time the dogs go outside and getting eaten alive by the neighborhood mosquito population that is apparently immune to Deet. Ken's gonna talk to the contractor about how they'd like to repay us for the gate.

(2) I just want this part of the job done and all the contractors off my property. I work at home two days/week and am getting tired of the overheard conversations and the constant noise. It was cool at the beginning, and now I'm over it. Please, finish!

I have been asked by multiple people how I am handling having such a disaster surrounding me both inside and outside the house. I have but one survival technique: I picture my enormous new kitchen with its beechwood cabinets, granite countertop, and slate floors, and I remember why this is all worth it.

Anyway, more to come. Ken is currently down in the crawl space dragging the old oil tank out. We had PECO hook us up to the natural gas line last winter (saved a huge bundle on heating), which makes the oil tank obsolete, obviously. He filtered the oil that was left in it--roughly 40 gallons the last I heard--and gave it to neighbors, and now it just remains to get a very heavy (200-250 gallon?) oil tank out of our lives.

Special bonus feature:Monday night we attended an open house at Engine 50 in North Philly to celebrate my father-in-law's retirement from the fire dept after 37 years of service. Here are some pictures to enjoy. 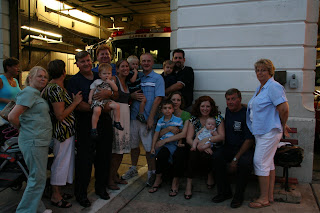 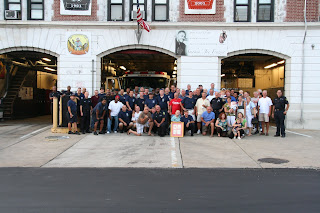 Dad receiving a plaque commemorating his brother, Lt. Stephen E. Murphy, who died in the line of duty in winter 1998 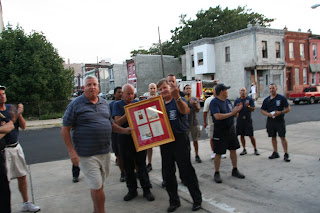 And, like a true gentleman, him immediately turning over the plaque to Uncle Steve's wife, Aunt Denise: 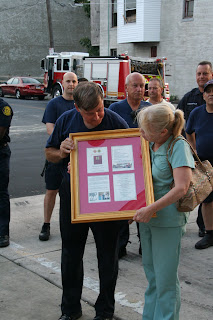 As a practical joke, Dad had his twin brother dress up exactly like him and wander around the party confusing people. That's Uncle Den on the left and Dad on the right: 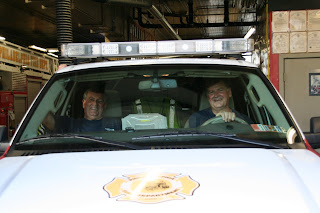 Dad sliding down the fire pole to show the grandkids how it's done: 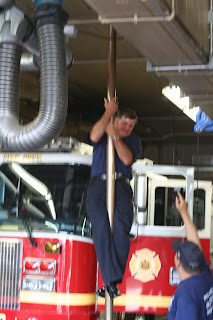 Padraic and Henry in front of the fire engine: 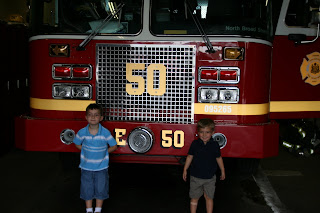 Henry trying on a firefighter helmet: 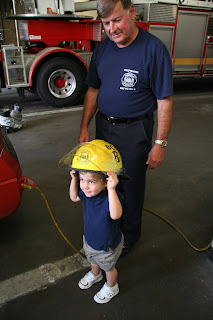 Henry tipping over because the helmet was too heavy for him: 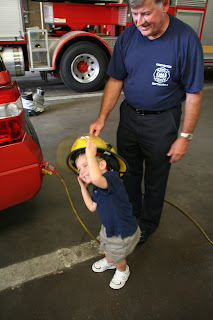 Congratulations, Dad, on 37 great years of helping the people of the city of Philadelphia! We have some suggestions on ways to keep busy if you get bored in your retirement!
Posted by paddy+henrysmom at 7:14 PM No comments:

Wow, you go on one little trip to British Columbia and a lot of stuff happens. First, a word about my trip: Over.

As soon as Ken dropped me and my sister at the airport on Saturday morning, he had his crew assemble and get to work. Don't worry; he supplied them with Dunkin Donuts coffee to get their motivation up before the heat index hit over 100 degrees.

The day started with Ken and the guys realizing that perhaps there should be something holding our house up now that there was the very big hole under our dining room and the back wall of the house was missing. But a pesky concrete block was in the way. Enter Chris B., who with arms of steel knocked that block off. Hee! Then the header went in and our house didn't fall down after all (well, not yet). 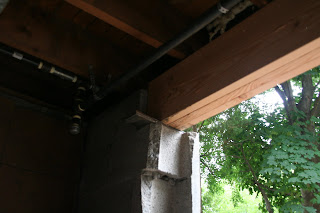 Once that important piece was in place, the guys headed up to the roof, where everyone took turns with the circular saw to cut through the sheathing. It only took them six saw blades. Then they all ripped roofing and sheathing off with their bare hands (or so I'm told) and nearly filled the 20-yard Dumpster that had been gracing our driveway. 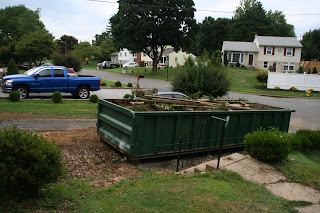 Since August can be a teensy bit filled with thunderstorms, they left some roofing around the edges and maintained the A-frame supports to have something for ye olde tarp to be supported by. I have this weird thing about it raining inside my house, so they wrapped it up nice and tight. Who doesn't want their home to look like this? 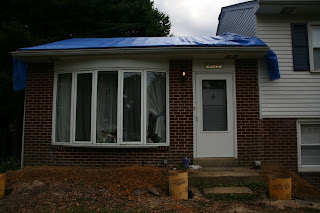 It's a new fad, and I encourage you all to hop onboard this trend train.

But seriously, lots of work happened while I was 3000 miles away, blissfully selling technical books to statisticians. In the photo above you can see that the shrubs in front of the house are gone and there are sonotubes in strategic locations. The shrubs had survived the weekend we tore down the deck because we simply ran out of time to kill them, but they're gone now. They trucked outta here with that first Dumpster load. Yeah, I said first load. We have a new 20-yard Dumpster in the driveway. It's better than pink flamingos in the yard, right? Right?!

There are so many people to thank: Chris B, Mike G, Phil B, Wayne D, Dad M, Jay W, Shawn N, Todd S, and Jim C. And, of course, my fantastic hubby, Ken. I feel like we won an Academy Award, but actually it's even better because I am getting a new kitchen, people. And if you've seen my current kitchen (I'm too embarrassed to post pics just yet--got some reorganizing to do), you know that's a huge deal. The master suite is just gravy. I want a new kitchen so badly I can withstand huge holes being dug in my yard and my house having neither a back wall nor a roof for a few weeks. It's like camping because you can hear the cicadas as if they are in the room with you. And there's a layer of dirt on everything. Neat.

OK, that's all I can manage for now. Lots more happened in the time the boys and I were gone, but I'll have to update you on the rest in another post. I'm feeling sleepy just thinking about all the work those guys did last weekend.
Posted by paddy+henrysmom at 9:16 PM No comments:

Lesson of the day

When you order too many cabinets to be delivered at one time, suggest to the delivery people that they either bring all the base cabinets or all the uppers. Cuz a mix of the two doesn't do anyone any good.